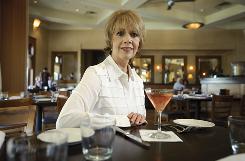 For Brenda Coffee’s friends, choosing a drink at a Mexican restaurant on a recent night out involved simple questions. Salt or no salt on their margaritas? Beer by the bottle or on tap?

But for Coffee, a breast cancer survivor, the choice of beverage raised far deeper questions. Would alcohol increase her risk of getting cancer again? Or would it clean her arteries and boost her heart? Did she want to do everything in her power to avoid a relapse? Or, having suffered so much — 10 operations and eight rounds of chemotherapy — did she want to relax and live a little?

“I worry about every drink I take,” says Coffee, 60, of Boerne, Texas. Though she exercises and eats healthy, she also says, “I don’t think anyone I’ve talked with is cut out to live the life of a nun.”

Even very light drinking increases the risk of breast cancer, but it also appears to help the heart, says Walter Willett, author of Eat, Drink and Be Healthy and a professor at the Harvard School of Public Health.

Scientists are still trying to learn exactly how alcohol influences breast cancer risk. One clue: Alcohol increases estrogen, research suggests. In a study published online in The Journal of the National Cancer Institute in August, researchers found the strongest connection to breast cancers fueled by estrogen.

Even three to four drinks a week may contribute to relapses, especially in survivors who are overweight, obese or postmenopausal, according to an study in August in the Journal of Clinical Oncology.

Yet despite these hazards, because alcohol also reduces the risk of coronary artery disease, studies have found that women who indulged in a drink or two a day actually had a slightly lower overall risk of dying from a heart attack, Willett says.

The risk of dying from a sudden heart rhythm disturbance drops, too, by 36%, for women who have a drink a day, Stephanie Chiuve of Brigham and Women’s Hospital in Boston reported Friday in the journal Heart Rhythm. But women who had two or more drinks a day were no better off than abstainers, according to the analysis of 85,000 women in the Nurses Health Study.

Non-smoking women who are young and lean have such a low risk of heart attack that drinking won’t really help them but may hurt them, by helping to fuel tumor growth, Willett says. Women can get the benefits of alcohol through exercise, he says.

Emerging evidence suggests that a healthy diet — one with enough folic acid — may help to counteract the negative effects of alcohol, Love says.

As for Coffee, she decided to sip ice water and lemon at the Mexican restaurant that night. But she found it impossible to resist her friends’ freshly shaken chocolate martinis two weeks later. Coffee, who blogs about her experience at breastcancersisterhood.com, says, “Sometimes we just want to walk on the wild side and eat pasta and dessert and drink martinis.”